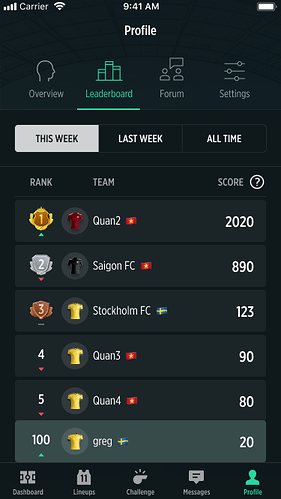 We had a user request a while ago to introduce daily leaderboards, so that new teams also have a chance to shine. After some time in the TrophyRoom workshop, we’ve come up with a concept that is an intermediary step towards a completely awesome league system including domestic, regional, continental and global leagues.

Until we get there, we want to improve both the point system and the leaderboard feature overall.

The new system will give you 3 points for winning a challenge, 1 point for a draw and 0 points for a loss - effectively mirroring the point systems of the real leagues. You’ll also get -1 point if you didn’t participate in any challenge at all during the week - which is a way to reward active users.

The new leaderboard will have 3 tabs:

This means that everyone can be the champion of the week, and because of the new point system, it’s also based on your skill and performance as a fantasy team manager.

Let’s just say that there will be prizes in a near future. No further comments.