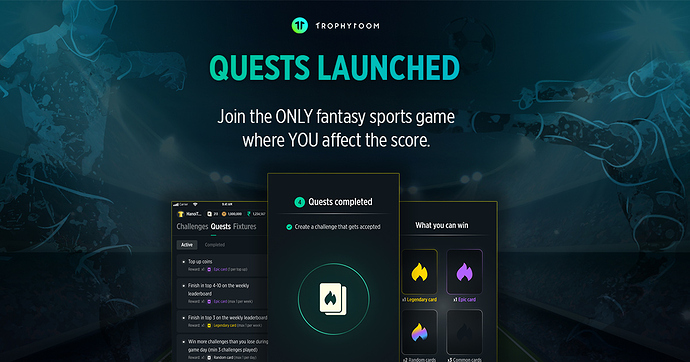 Big news buddy! We’ve just released Quests – a very cool new feature that will now replace the way free cards are handed out. Before you got a new random card for each won challenge, which has lead to seasoned players sitting on piles of cards while new users need to struggle way more to achieve the same.

In order to balance the game, we have divided cards into 4 different levels: Legendary, Epic, Rare and Common and also tweaked the rarity of each card level (Legendary being the most rare and common the most common, duh!). In addition you now get free cards by completing Quests – simple daily and weekly tasks. Check out the Quests below:

And this is just the beginning! Expect new Quests and rewards in the future.

As you may have noticed a while ago, the cards now have different colors and categories. This means we’ve also introduced card levels and tweaked the rarity of each card. Before, they were all equally common, no matter how powerful. Now, the more powerful cards are more rare.

We improved the challenge results view and now break down each finished group of challenges in a way that hopefully is a bit easier to understand.

You will also notice an immediate Quest results view as soon as a Quest has been completed. It will reveal your reward. You’ll also get a daily pop-up when you launch the app to remind you about active and completed Quests. Note that if there are many other pop-ups, like challenge or quest results, this one won’t be displayed on that launch.

Merry xmas and have an awesomely happy new year!

Hello, sorry for putting this post in irrelevant subject.
We people based in Asia need pre match tactics features early and it will be better if we can able to schedule cards for whole duration of line-up.